On May 18-19 2018, the newly formed Du Boisian Scholars Network held its first national convening at Northwestern University. The convening was inspired by the Pan-African Congress meetings initiated by W.E.B. Du Bois and Ida Gibbs Hunt in the 20th century. The convening helped to assemble scholars committed to the critical tradition of a Du Boisian sociology by providing an intellectual space to conceptualize the importance of Du Bois’ theories and methods for contemporary sociology. The free convening was generously supported with funding provided by Northwestern University, Brown University, the Univ. of Chicago, and the Univ. of California Los Angeles. During the convening, organizers facilitated several discussions around pre-selected topics, including: the epistemics of a Du Boisian Sociology, mentorship for the next generation of Du Boisian scholars, and using a Du Boisian sociology to enact social change. Like the Pan-African Congresses, an important aim of the convening was to identify, discuss, and adopt resolutions to address issues within sociological classrooms, curricula and the canon.

The more than 100 scholars that assembled for the two-day convening fit into a number of efforts to ensure that Du Bois’ legacy is both recognized and respected. Recent publications from sociologists Aldon Morris, Earl Wright II, Marcus Hunter, Karida Brown, and José Itzigsohn have helped to reaffirm the significance of Du Boisian sociology and the cadre of scholars who collaborated with Du Bois to form the Clark Atlanta School as a founding institution of American sociology. These scholars and others collectively provided critical provocations to further examine the epistemic, mentoring, and social change resources situated within a Du Boisian sociology.

Abigail Sewell, Emory University sociologist, presented the first of several stimulating provocations. Sewell suggested that Du Boisian sociology can help to emphasize the racist social structures that organize social differences: : “I’m not interested in centering race and statuses. I’m interested in centering causal mechanisms that are driving the differences between black and white Philadelphians. We must shift from studying race to studying racism.” Indeed, Sewell’s allusion to Du Bois’ sophisticated, multifaceted, and capacious analysis in the Philadelphia Negro helps to reveal the utility of using mixed-methods to understand how social structures shape the formation of racially disparate social worlds. While this is overtly applicable to qualitative sociologists, Sewell also elucidated how a Du Boisian sociology was useful for quantitative sociologists as well. Drawing on Du Bois, Sewell said, “when you have mastered numbers, you will in fact no longer be reading numbers, any more than you read words when reading books; you will be reading meanings.”

Other scholars provided robust provocations about Du Bois’ importance as a sociological theorist of racialized modernity. Karida Brown, UCLA sociologist, provided a revision and refinement of Du Bois’ foundational description of the color line as the problem of the 20th century. Brown explained, “In the 21st century, the color line is on fleek” to clarify that racial disparities continue to penetrate and puncture the social world. In addition, Earl Wright II, Univ. of Cincinnati sociologist, advocated to contest sociology’s confinement of Du Bois as a scholar of race: “We cannot ghettoize Du Bois. He theorized race, but his work extends beyond race.” José Itzigsohn, Brown University sociologist, also described Du Bois’ relevance as a sociological theorist who acknowledged “a history of a system that is racial and colonial capitalism…rooted in historical context…opposed to mainstream sociology that looks for abstract patterns regardless of historical context. 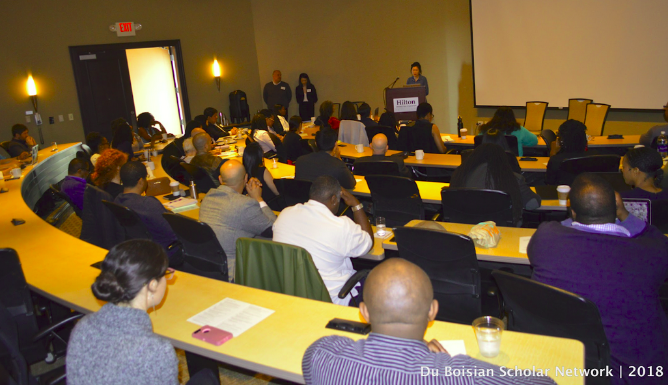 Cultivating the next generation of critical scholars of Du Bois through mentorship, epistemologies, and enacting social change served as the three major aims of the convening. In describing the importance of mentorship, Barbara Harris Combs, Clark Atlanta University sociologist, posed a valuable question and call-to-action to the group: “What are you going to do to challenge the status quo? We have to bring up all scholars, not just the elite ones.” In the subsequent sessions on epistemologies and social change, graduate students took center stage to highlight the ways in which Du Bois’ conceptualization in Black Reconstruction linked people of color as “black, brown, and yellow laborers” and how this linkage might serve as a strategy for generating an emancipatory sociology.

In reflecting on the convening via social media, Ashley Crooks-Allen, a graduate student at Univ. of Georgia, wrote, “The point wasn’t to just discuss Du Bois the man, but to imagine a field that engages a Du Boisian Sociology. For the first time in a long time I was reminded that there is space for me in the academy to do the work that uplifts my people.” The Du Boisian Scholars Network represents scholars and activists working in the critical tradition of Du Bois, Anna Julia Cooper, Ida B. Wells and others. These cadre of scholars believe emancipatory sociology is possible when subaltern standpoints, epistemics, mentoring, and activist tools are both acknowledged and applied to the process of sociological knowledge production. As Aldon Morris stated, “When you are doing radical and insurgent intellectual work, you are doing activism.”